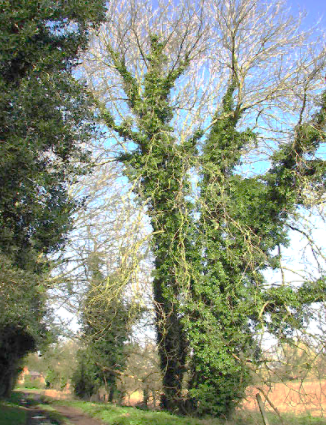 Ivy…does it cause harm to my trees?

Common ivy is an evergreen shrub which is native to Britain, as well as indigenous across Europe, Asia and North Africa. Common ivy is highly recognisable shrub within the British landscape; which can commonly be found on trees, hedgerows and buildings. Your local arborist can advise on the ivy is causing problems with your trees.

Does ivy cause harm to my trees?

When it comes to ivy growth on trees, there’s an abundance of mixed reviews; but fundamentally, ivy doesn’t necessarily have a negative impact upon a tree until the ivy growth begins to extend its growth and encroach within the crown of a tree.

Once the ivy begins to encroach its way within the crown of a tree, it increase wind-loading (additional weight) onto the trees limbs, which in some cases, can lead to weakened branch structure, furthermore, this can ultimately lead to limb failure. As well as weakening the branch structure, once the ivy encroaches into the crown, it reduces the trees capacity to produce energy. This means that it’d affect the trees ability to photosynthesise.

Are there any conservation benefits to ivy growth on trees?

It has been found that ivy growth can have some great conservational benefits; for example:

In summary of the above, ivy growth on trees has more of a positive impact with regards to conservational purposes when growing particularly from the base of a tree onto the main stem. However, as also mentioned above, ivy growth will have a negative impact to a tree once it begins to encroach the crown and effect the trees ability to photosynthesise.