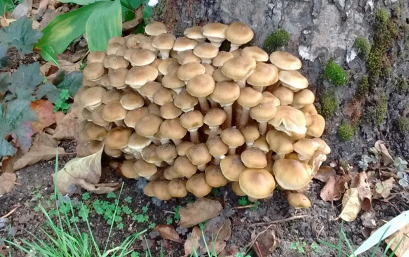 The Ins and Outs of Armillaria spp.

In a world full of moulds and mushrooms, some can be more aggressive towards plants and trees than what others can be. A more aggressive and destructive fungi is Armillaria spp., also commonly known as honey fungus. This is a basidiomycete fungus from the Armillaria genus. Armillaria is a biological species. Different species including Armillaria mellea, Armillaria borealis & Armillaria gallica to name just a few. Honey fungus is a pathogen that causes root rot in many species of plant/ tree; however, it can mainly be found infecting the root systems of hardwood species within deadwood or in open areas at the base of the tree.

Each individual mushroom will have a smooth cap, with the average diameter of 3-15cm, with a ‘convex’ shape to the cap to begin with, gradually flattening with age. The peripheries of the caps often become arched when reaching maturity. Honey fungus is typically of a ‘honey’ colouration, although individual caps can vary with darker-coloured scales to the centre of the cap. At a juvenile status, each individual mushroom will have white gills, which will become a pinkish-yellow colour within maturity, with an overall white spore print. Armillaria mellea is cylindrical and will taper towards the base in order to fuse stipes of other mushrooms together to form a cluster.

What effect does Armillaria spp. have on trees?

Honey fungus causes root rot, which will lead to the fruiting production of the clusters of mushrooms at the base of trees in the autumn that is infected with the fungi. Infection of Armillaria spp. is caused when rhizomorphs growing within the surrounding soil from already infected roots encounters uninfected roots of plants/ trees, at which point the mycelium enters between the root cells and causes root rot; which ultimately weakens the root system. Once the rhizomorphs & mycelium has infected the roots, they’ll then begin to invade the main stems, gradually decaying the wood; ultimately resulting in a reduction of vitality for the tree; this results in both the physiological and structural condition of the tree being compromised. Due to the effect that Armillaria spp. has on the structural integrity of the tree (this includes the root system and basal condition), this variety of fungi can cause failure. Trees that are infected with Armillaria spp. will start to show cracking/ bleeding of the bark towards the base of the main stems, dieback within the crown will become apparent as well as failure to flower or a sudden burst of flower usually before the tree reaches poor vitality/ death.

What trees can be affected by Armillaria spp.?

Honey fungus usually targets hardwood species. However, it can target the following species (note; this is not an exhaustive list):

Are you concerned that one of your trees could be suffering from Honey fungus? One of the team will be more than happy to discuss your concerns.

Contact us on 01603 358778, or for a more rapid response, send us some pictures of the suspected fungi for a faster identification.