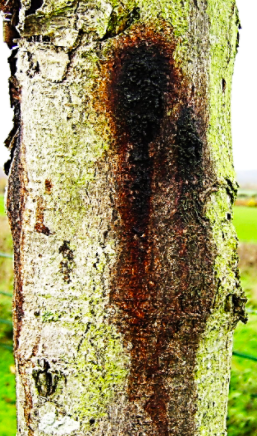 What a bleeder! Bleeding Canker of Horse Chestnut

How do I know if my Horse Chestnut tree is suffering with Bleeding Canker?

Bleeding Canker is usually identifiable by bark cracks, cankers/ lesions located on the stems and branches of a Horse Chestnut. Dark fluid will ooze from the cankers seemingly making the Horse Chestnut to appear like it’s bleeding. The colour of the fluid will vary from season to season. During the spring, the fluid will be a darker red to almost black in colour and almost transparent, whereas in the summer months it turns into an almost rusty-like opaque colour. In Autumnal months, renewed bleeding to that of Spring time may occur.

If bleeding appears to continue over several months, it may cause the centre of the affected patch of bark to crack, which’ll allow for other fruiting bodies to become active within the decaying wood. If a Horse Chestnut has been suffering with Bleeding Canker for many years, then this may start to reflect within the overall condition of the crown. The areas of dead cambium and phloem beneath the cankers will coalesce and extend the entire branch/ stem (whichever has been affected). Furthermore, symptoms of trees suffering with Pseudomonas syringae pv. Aesculi will begin to show in the crown; for example premature leaf drop, the consistency of yellowing foliage and dieback within the crown.

It has been found that over a period of time, the bacterium, Pseudomonas syringae pv. Aesculi, can cause death within Horse Chestnut trees. However, Horse Chestnuts can also recover from the infection with some specimens also appearing to be resistant to the bacterium itself.

What is the best way to manage infected tree stock?

If a site you manage has a significant amount of Horse Chestnuts infected with Bleeding Canker, it is recommended a survey is carried out in order to assess the number of affected trees that are located on site. Recorded on the survey should be: the total number of Horse Chestnut trees on site, mapped locations of the trees, the number of affected trees with Bleeding Canker, extent of symptoms shown (e.g. how many lesions/ cankers currently present, crown symptoms etc.) and photographs.

Your next steps should be to contact a trusted tree surgeon. Our team is trained in spotting these signs of bleeding canker and can help you with the next steps.